Viking ship was one of the technically greatest and the most aesthetically impressive structures in the dark age of Europe. Indeed, without the Viking ships, the Viking Age would not have become a world famous period. These Sea Serpents not only helped the Viking with transportation but they also occupied an important part in Viking exploring, raiding, and trading voyages. There were two common types of Viking ships that were found: Langskip (warships) and Knorr (merchant ships). Specifically, a warship was narrower and shallower than a knorr. A langskip was powered by both oars and sail while the knorr was powered mainly by sail. As the warship was designed for maneuverability and speed, the merchant one was constructed for cargo carrying capability.

With the help of such ships, the Viking up across the seas easily. When they went on a raid, their ship could be hauled into the beach. The Viking, thereby, could jump out to fight and make a getaway if they were chased.

The Construction of Viking Ships

The Viking ships were built near rivers or the inlet of the sea. The keels of the ships were mainly made of tall oak trees. Long planks of wood were cut for making the sides and short pieces for the ribs. The planks were overlapped and riveted together. This to some extent made the ships much stronger.

The creative Vikings used the animal wool and the sticky tar from pine trees to keep out the water by padding such things into every crack of the ships. The shipbuilding tool was primarily the famous Viking axe. 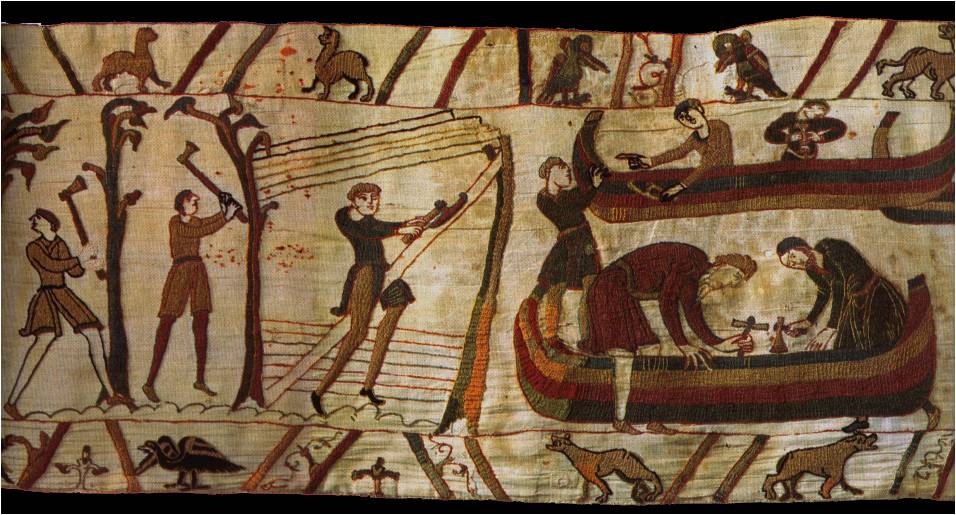 As the ships were built next to the rivers, the Viking found it quite simple to launch the ships into the water. They utilized the log rollers to make their pushing easier.

The sail of the Viking ships was square, big, and made of woven wool. The mast could be folded down in some ships. To steer the ships, one man would work a big steering oar at the end of the ships. In case there was not enough wind to operate the ships, the men would row with the long hard wooden oars prepared. This mentioned design was common for the knorr meanwhile the langskip was quite different. The langskip most of the times had no sail and was operated with the hand of the human. The ship could carry 40 to 60 men who would sleep and eat on the deck. Their main duty was to row the oar and keep the ships moving.

The experienced Viking seamen knew a lot about the winds and the currents. They might watch the birds and the colors of the sea to detect the closeness of the land. In many tales, ravens were kept on voyages only for tracking the land when the Viking needed.