We often catch sight of animals or birds in Norse myth being illustrated alongside the gods and playing certain roles. The chief god of Aesir gods – Odin the Allfather himself owned a pair of ravens who helped him with information. Even though ravens in many beliefs were an omen of death or loss, ravens in Norse myth were mostly respected thanks to their strong connection with Odin.

As mentioned, Odin himself had a pair of ravens called Huginn and Muninn respectively. In many depictions, raven became an important point to figure out Odin’s presence. Because most of the time ravens were depicted perching on Odin’s shoulder. 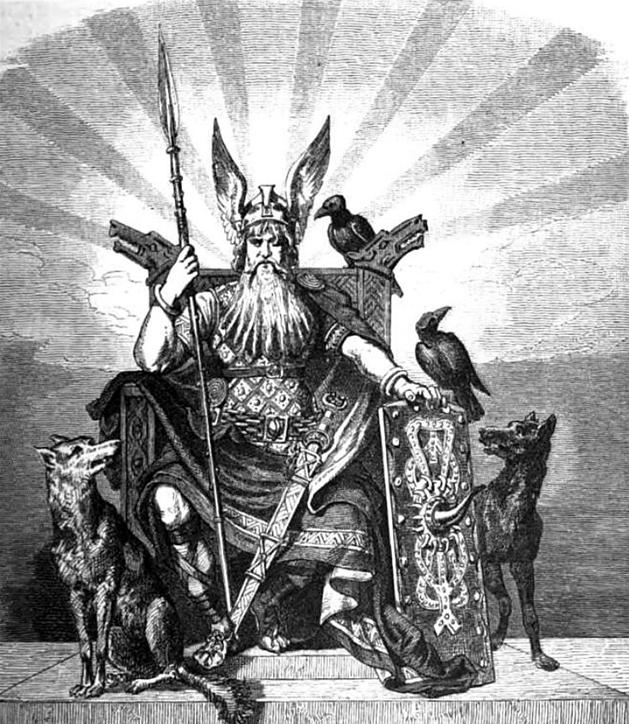 According to some materials that survived, the word “Huginn” meant “thought” and “Muninn” meant “memory”. This point to some extent clarify the roles of this pair in Norse myth.

To be specific, in the morning of every day, Odin sent the birds out to fly over the whole world, and by breakfast, they would come back again. The two ravens flew back to Hlidskjalf throne of Odin in Asgard, perching on his shoulder and whispering in his ears what they had seen in the Nine Worlds. By that way could Odin receive the interesting piece of news in the whole world. People may question why Odin the Omniscient still needed such news. The answer was: as a nonstop seeker after wisdom, Odin was believed to hardly refuse any grain of knowledge. This totally made sense. To extend the story, the raven was also interpreted as the presence of Odin and his welcome. Since in many ancient illustrations, Odin appeared with Huginn and Munin to welcome the brave human warriors, who could not survive the battle, to Odin’s palace – the Valhalla. This did not mean that ravens were totally the sign of death (though they did appear in front the fallen warriors). Actually, in this case, the ravens were the guide to get the brave fallen warriors to Valhalla. That must be a good sign as the life in Valhalla was desired by many.

To conclude, the meaning of ravens in Norse myth was somewhat different from that in others. To Odin, his ravens were of importance as they kept him informed of the worldwide news. To the warriors, the ravens were the symbol of Odin and his greeting to take them to Asgard with him.

If you are looking for some raven related jewelry presenting Odin's power, BaviPower is now offering such beautiful and flawless ornaments, check it out here!