The Vikings have become famous for their voyages and seafaring deeds. In many ancient Viking tales, it was said that the Vikings carried one powerful symbol with them throughout their voyages. This symbol has stood the test of time and become a well-known Viking sign today. It is Viking Compass.

What is Viking Compass?

Viking Compass or Vegvísir was the symbol of power, magic, and mystique. Vegvísir possessed eight spikes pointing out (though they were not exactly the spikes). The symbol, to a certain extent, resembles the compass. Many people interpret the design of Vegvísir as the protection and the guidance in the storm. 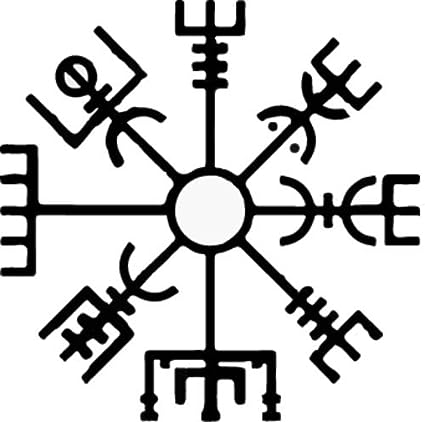 The origin of this symbol was of mystique and there have been no convincing materials related to this at all. But as far as we are concerned, this symbol is now known as the Viking Compass. The meaning of the word “Vegvísir” could be interpreted as “the signpost” or “the Wayfinder”. “Vegur” means “road”, “path” and “visir” means “guide”.

The Power of Viking Compass

The power of this symbol was presented in some lines of a prose:

“If this sign is carried, one will never lose one's way in storms or bad weather, even when the way is not known”

According to some sources, the Viking fishermen or warriors liked to apply the symbol of Vegvísir on their ships. Because they believe this symbol would guide them back home safe and sound. Accompanied by the divine power and mystique around, the symbol of Vegvísir was very favored and respected a lot. Vegvísir was also used as a talisman not only in the storm or at sea in the literal sense, it was the talisman of luck, protection, courage, and strength for the Viking daily life. This magical symbol was believed to help them surmount any obstacles that appeared in their life. Until now, the meaning of this symbol remained nearly unchanged. There is a wider variety of people who prefer this symbol for its powerful tales and meaning in the past. The Viking Compass is now becoming a favorite tattoo for its meaning and beautiful design. Also, the symbol of Vegvísir has turned into one of the most beloved jewelry patterns. Like the ancient Vikings, the wearers hope their Vegvísir jewelry will be the best life guidance forever.