Long long ago, when the gods wanted to arrange a feast with two giants Aegir and Ran who were the sea dwellers. The two giants offered to host the party if the gods helped them find a cauldron big enough to brew the mead for serving the guests. Of all the Norse creatures, only the giant Hymir had the cauldron that could satisfy their need. Thor, who was good at dealing with the giant and such type of situations, volunteered to meet Hymir to ask for the cauldron.

Having arrived at Hymir's house, Thor was treated with all the hospitality of the giant. Hymir slaughtered three bulls to serve Thor during his stay. Thor, however, impressed and somewhat dismayed Hymir as he ate two bulls quickly at his one sitting. Because of this, the giant declared that they needed to go fishing for their next days. 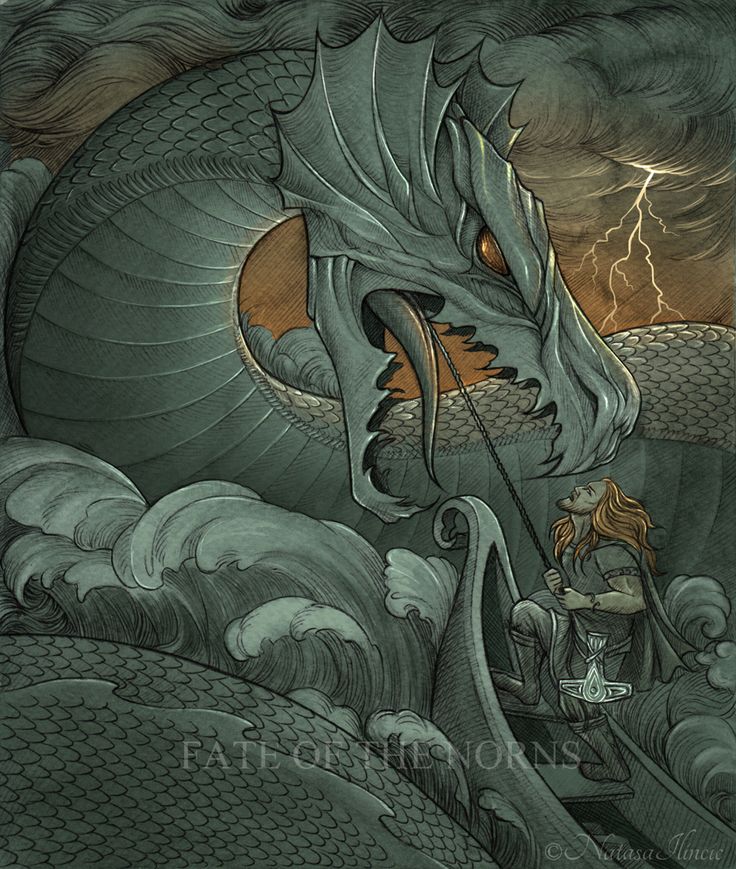 Before fishing, they prepared the baits. Thor killed the remaining bull of Hymir and used its head to make the bait. Although the giant was annoyed by this action of Thor, he hoped the thunder god would use his strength to help the fishing trip.

Off they went to the middle of the sea and fished. The two caught two whales easily but this was not enough to satisfy Thor. Then he rowed the boat farther away from the shore. However, Hymir expressed his fear as Jormungand would raise from the waves. Contrary to Hymir's fear, the appearance of Jormungand, the sworn enemy, lured Thor to row and row.

Finally, Thor put down his oars and dropped his fishing line into the water. The time went by with the silent sea but Thor quickly felt the strong force from the sea below. As Thor tried to pull the lines up, a tremble shook their boats. The giant was too scared to say anything but heavily leaned himself onto the boat. But Thor still focused on his sworn enemy. 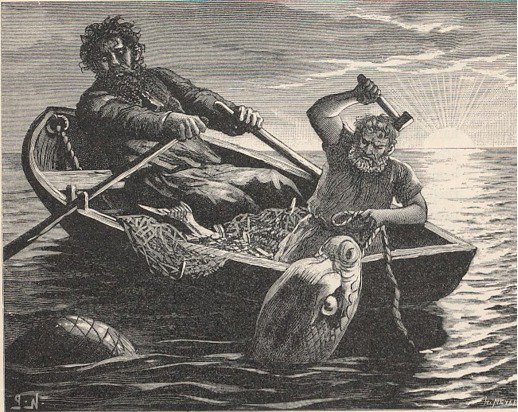 Thor ready to deal a deadly blow from Mjolnir

When Thor successfully pulled up the head of Jormugand beneath the sea, he reached his Mjolnir hammer and was ready to deal a deadly blow. But much to his surprise, Hymir cut the fishing lines, which meant releasing the enormous Midgard Serpent to the sea. However, this unpredictable action of Hymir was reasonable. According to the prophecy, once Jormugand lifted his head from the waves, Ragnarok would begin. Because of his fear of Ragnarok, Hymir cut the line. But anyway, Thor was so angry that he threw Hymir out of the boat and went back to Asgard with whales and the cauldron.