In Norse mythology, Jormungand was one of the most fearful and savage creatures that would wreak havoc on the peace of the cosmos. Jormungand Norse Midgard Serpent was depicted in words and pictures as an enormous serpent or maybe a huge dragon that dwelled in the dark ocean. But when the days of Ragnarok dawned, Jormungand battled against Norse gods.

Jormungand was one of the hideous children of Loki the Norse trickster and a giantess Angrboda “She Who Brings Anguish”. As Loki was believed to be born by a giant couple, Jormungand was innately a giant. Jormungand had other two siblings who were namely Wolf Fenrir and Hel. While Wolf Fenrir was known as the Odin slayer in Norse myth, Hel was the queen of the Helheim – land of the dead. It seemed that Loki’s children were the main conspirators of the Fall of Gods (Ragnarok).

When Jormungand was still little, Odin the Allfather, afraid of the impending danger of Ragnarok, cast Jormungand into the dark ocean.  In the dark ocean laid a little serpent Jormungand who then grew up large enough to encircle the whole Midgard. He held his tail in his mouth and his enormous body surrounded the entire Midgard. The sworn enemy of Jormungand was Thor. Thor was the Norse God of lightning and thunder and a hammer-wielding god. Thor and Jormungand encountered each other twice in the myth. The first time was when Thor went fishing with a giant. Adrift on the boat, Thor would have caught Jormungand if the giant companion had not cut the fishing rope. Actually, the giant was afraid that Jormungand rising from the water was the first sign of Ragnarok and Thor got angry anyway. The second time was during the event of Ragnarok. They battled against each other until Thor managed to kill Jormungand. However, when Thor walked nine paces away from the dead serpent, he fell and died because of the deadly venom of the serpent.

Thor VS Jormungandr in Ragnarok by kukokrunch

In Norse myth, Jormungand was one of the main villains. In the modern sense, he is not totally evil though. It is now reasoned that what Jormungand did was to take revenge on the gods who had separated his family and tortured him and his siblings even though they were too vulnerable at that time.

Jormungand is also an example of Ouroboros symbol. The Ouroboros is the symbol of a serpent or dragon biting its own tail and making a circle. It represents the repeated circle of natural limitless creation and destruction, or life and death. In Norse myth, the play of Jormungand was like what the Ouroboros represents. Jormungand and other villains ignited the Ragnarok, causing the destruction of the Norse pantheon but it also brought about a creation of a new world. Due to the connection between Jormungand and Ouroboros, the symbol of Ouroboros has now become one of the most favorite Viking Tattoos in this day and age. 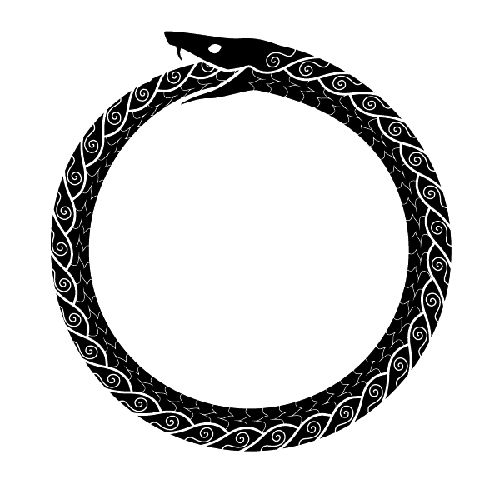