The Death of God Baldur

In Norse mythology, one of the most famous tales was the Death of Baldur. Because Baldur death was the very first sign that alarmed the Norse pantheon the incoming Ragnarok, Baldur death became a threat and a terrible nightmare to the Norse world.

Who was God Baldur?

Baldur was the son of Aesir chief god and goddess, Odin and Frigg. He was the most beautiful and shining god in the Norse pantheon. Even the most beautiful thing in the cosmos would bow down before God Baldur for his outstanding and pure beauty. Baldur married goddess Nanna and they had a son called Forseti. Baldur also had some siblings, some of whom were Thor the Thunder God and Vidar the Fenrir Slayer or God of Revenge.

When Baldur grew up and became a handsome god, he often had the same nightmare showing his own death. His mother, goddess Frigg, had the same nightmare. This tore Frigg apart as she knew that someday her beloved son would depart the world of Asgard. With the great mother love, Frigg tried many ways to prevent the Death of Baldur. She sent out the messages to all the corners of the world, begging all creatures to swear never to hurt her son. Everyone in the cosmos agreed. However, there was a mistletoe which was so small that Frigg thought it could not harm Baldur and ignored. At that time, people merrily threw things at Baldur because they knew those things would bounce off and not harm Baldur anyway.

Loki, the Norse trickster, could sense there must be something left to harm God Baldur. As the shapeshifting master, he changed his appearance to someone else and came to meet Frigg. And with his cunning and fast talk, he got the things he wanted. On coming back, Loki picked a small mistletoe and turned it into a sharp arrow. 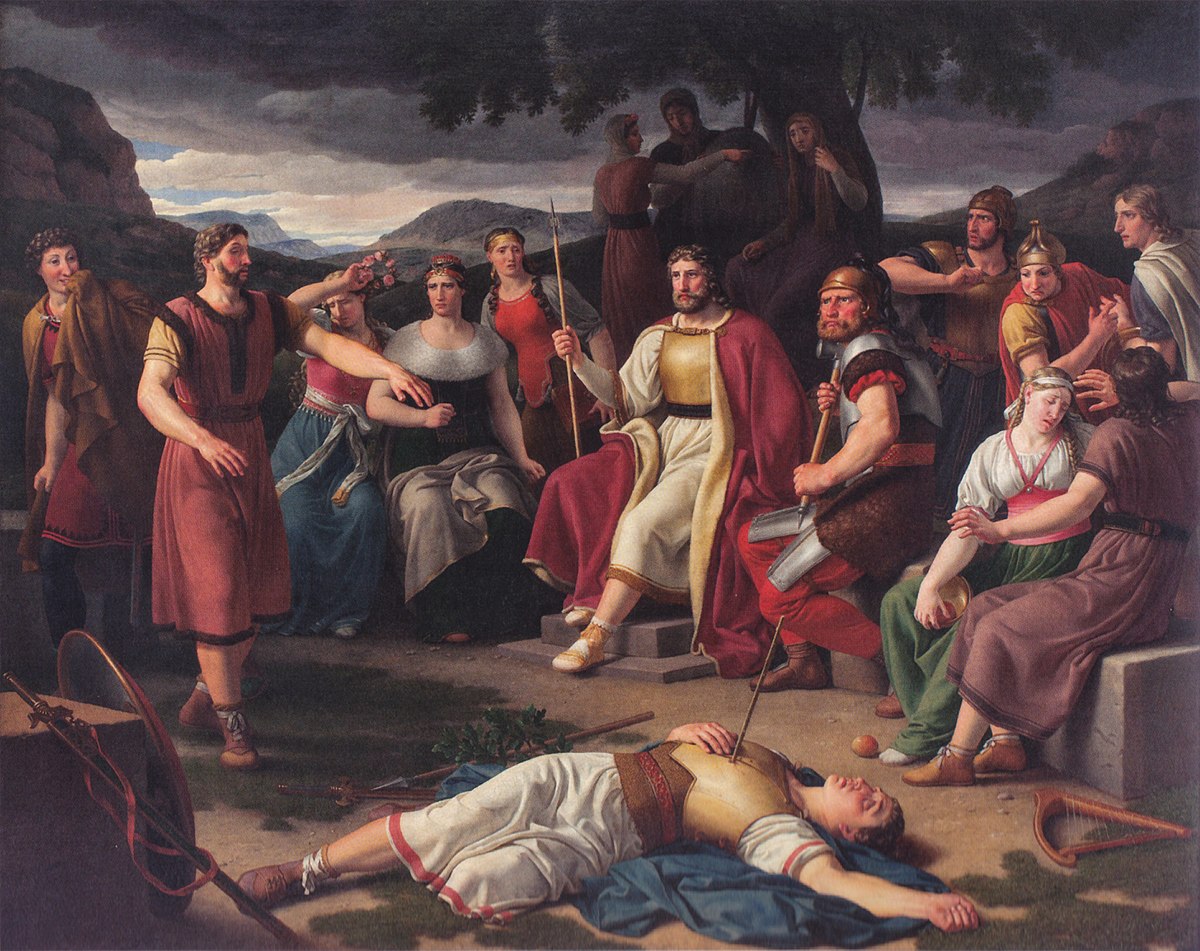 When he joined the crowded, who were throwing things at Baldur, he met Hodr, the blind god and also twin brother of Baldur. Loki tricked Hodr, giving Hodr the arrow and pointing it to Baldur. And straight to the chest of Baldur, the arrow went. Baldur fell to the ground at that moment and died.

The Death of Baldur was so sudden that it shocked everyone. The Norse pantheon, however, quickly picked up their mood and set off to capture the murderers. They knew Hodr was the one who threw the arrow and Loki was the conspirator standing behind. Off they went to take revenge on Baldur’s death. Hodr then was killed by Vali, another son of Odin, in Midgard. Back to Baldur, his funeral was carried out with the presence of all the creatures in the cosmos, from gods to dwarves and humans. Baldur’s body was placed on a huge ship and ready to set sail. Odin put his ring Draupnir on the pyre with Baldur, too. The death of Baldur was so much for Nanna that she fell dead on the spot. Her body was placed beside Baldur on his ship. The ship was pushed into the ocean and set on fire. The Viking funeral tradition of sea burial might have its origin traced back to this funeral of God Baldur.

The soul of Baldur came to dwell in Helheim the land of the dead. Although Odin sent his messenger Hermod to negotiate with Helheim Queen, Hel, about retrieving Baldur back. The plan, however, did not bear fruit.

Baldur Came Back after Ragnarok

After the battle of Ragnarok had come to an end, Baldur came back to life, becoming one of few gods who survived Ragnarok. Baldur resolved the conflict between him and Hodr and he guided his blind brother out of Helheim. Together they joined the new god pantheon and formed the new cosmos without Odin, Frigg, Thor, etc.(See the Regeneration after Ragnarok)