The Viking was so much influenced by their deeply-grained belief and religion. Their belief then affected many rituals in their community, including the funerals. Rather than an ending, the Viking funeral was a period of transition to another life. It was believed that the death would lead the Viking to the afterlife somewhere in the Nine Realms. Thereby, their families and relatives always tried their best in the funeral rituals to help the dead to a happy afterlife. 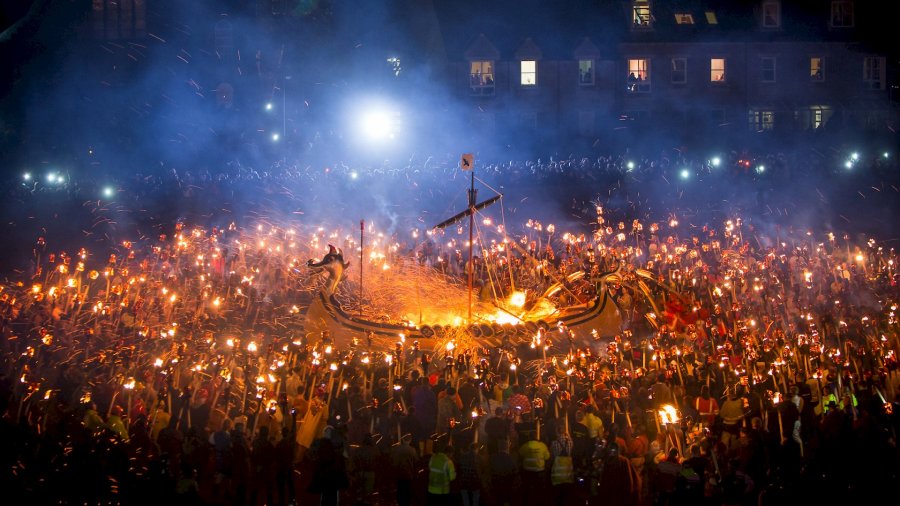 Valhalla and Helheim were two common places that one Viking was supposed to dwell in when they died. Valhalla was the palace of Odin who welcomed only the brave fallen warriors. Helheim, on the other hand, was a place for people who died of sloth, old age, sickness, and dishonorable death. The Viking had two main ways to send the dead to their afterlife: Inhumation and Cremation.

The practice of inhumation in the Viking age was common. The body of the dead in its normal state would be buried underground. And then people would place earth, stone, or dirt on the top of the body. The inhumation was much the same as what we know nowadays.

It was normal to the Vikings to cremate the bodies of the dead before their earth or sea burials. The Viking cremation was to burn the flesh and the bone to ash and the ash then would be scattered at sea or on land. By cremating the body, the Viking believed the smoke would carry them to the land of rightfulness in the afterlife.

The cremation pyre was described with a large construction of wood and the body was laid upon it. The construction of the pyre took hours to finish and it needed the perfections to ensure the heat would burn the body completely.

The Viking burials were not far different from what the modern burials. The Viking would bury the ashes of the dead in graves or under piles of rocks. There were some suitable belongings and gifts that would be buried with the dead. For example, the woman would be buried with the household tools, the warriors with shield and axe, or the craftsman with tools, etc. The Viking might assemble the graves into a graveyard. There was even a large stone ship constructed to allow the dead to sail even without the sea burial. Another kind of Viking was the ship burial. The practice of ship burials was less common than the normal burial on land. This type of burial was often for the big, noble, or wealthy figures. The body or the ash of the deceased would be put on the ships. The ships then were pushed into the ocean and burnt. However, this practice was considered to be somehow a waste as it may take months or even years to build a ship. And the ship was built only to be burnt?

The afterlife was believed to be the reflection of how the Viking dead had lived their life. Specifically, when they lived an honorable life, they would gain a good seat in the afterlife. Valhalla was the best of those afterlife places. The Vikings hold a firm belief that they would get a place in Valhalla as long as they bravely died in battle. This made many Viking warriors stepped into the battles without fear and fought courageously till the last breath. There were many other places for afterlife like Folkvangr, Helgafjell, and the worst was Helheim.