6 Norse Gods That You Should Know About

Odin was the Aesir chief god who presided over the Asgard land of gods. The fact was that hardly could anyone rival Odin’s power and reputation. He was among the gods whom the humans worshipped and respected the most.

Odin was the god of war, death, poem, and wisdom. His most famous palace in Asgard was Valhalla where he hosted the fallen human warriors. Those warriors were the Einherjar who fought alongside Odin in the battles of Ragnarok. Odin was commonly seen as an old man under a dark cloak with his long and white beard. He took the life of a wanderer who traveled the world to acquire knowledge. Odin the Allfather living as a wanderer

Legend had it that Odin would pay any price to gain wisdom. Indeed, he dared to gore out his eye to trade a glass of holy water for knowledge. The situation left him living his whole life with an infinite fountain of knowledge but an eye. Another occasion was that Odin sacrificed himself by hanging in Yggdrasil to get the meaning of runes which were believed to obtain the destinies of all beings in cosmos.

Odin did not survive Ragnarok and he was foretold to be killed by wolf Fenrir the God of Destruction.

Frigg was the wife of Odin and also the Aesir chief goddess. She was the only one goddess that was allowed to sit on the High Throne of Odin to observe the whole world. She was the mother of the beloved god Baldur. Frigg was the Earth Mother. Her power was associated with love, marriage, motherhood. Frigg was always depicted as a beautiful and kind woman who wove the clouds on her own spinning wheel. Because of the qualities she embodied, when her son might pass away in near future, she broke down and tried many ways to save him.

Thor was the Norse God of Thunder and Lightning and he was the son of Odin. His famous and primary weapon was the Mjolnir hammer which could strike lightning and create thunder and storms. Thor often hurled his hammer to hit the target and his hammer always returned to his hand instantly.

In many depictions, Thor was muscular and fiery. In the modern depictions, he held his hammer in his hand with gloves and belt, these accessories were believed to provide him the incredible power. Thor did not ride a horse, but he had two goats pull his chariot. His goats were often his meal as he killed them for sustenance. But the day after, he would resurrect the goats by his hammer. 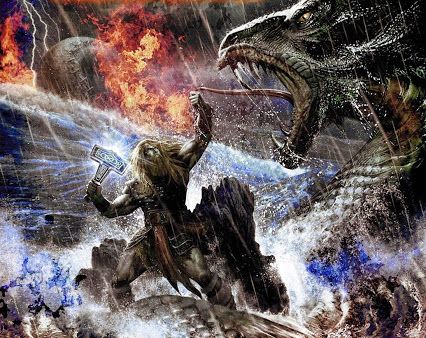 Thor could not survive Ragnarok. In his last battle, he encountered Midgard Serpent Jormungand who then was killed by Thor but the serpent left his venom poisonous enough to slay the god.

Baldur was the son of Odin and Frigg. His primary power was not often mentioned in the myth but the story of his was the most complete. He was so beautiful and shining that every beautiful thing in the cosmos would bow before his beauty.

The Famous tale of Baldur death

His most famous story was his death. He dreamt of his death coming and this really upset him. Though his mother, Frigg, begged every creature in the cosmos to never harm him, there was only one thing that she forgot, the small mistletoe. And when the devil knew this, Baldur was murdered and off he went to live in the land of Helheim. After the Ragnarok Fall of Gods, Baldur came back to life and became few gods who survived Ragnarok and constructed a new world.

God of Justice and Fairness, Tyr was respected by many people for his traits. The origin of Tyr varied from accounts to accounts, some saying he was the son of Hymir, some saying of Odin. But anyway, he was one of the Aesir gods who lived in Asgard.

Tyr was the bravest god in Norse mythology and his deeds in the myth evidenced this. When gods raised Fenrir in Asgard, Tyr was the only god that dared to approach and feed Fenrir. In the Binding of Wolf Fenrir, Tyr volunteered to put his hand in the mouth of the wolf as Fenrir required. And Fenrir bit and swallowed his hand. 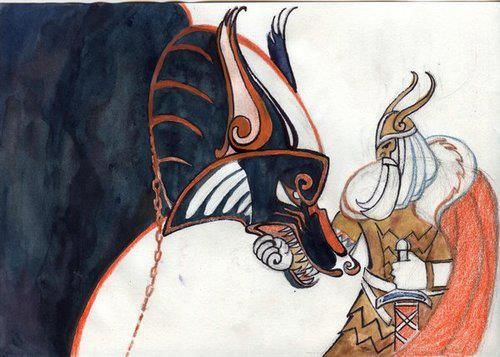 Heimdall was the Asgard Watchman. He was the son of Odin and nine maidens. Yes, nine maidens. As Odin was wandering the beach, he saw and fell for the beauty of the nine maidens and he decided to marry nine of them. And there came Heimdall who were raised in a special way.

Heimdall was tall and handsome. He got many abilities that made him a perfect Asgard Watchman. His eyesight was extraordinary as he could observe 100 miles around him. His hearing was acute as he could hear the grass growing under the earth and the wool growing on the sheep’s back. 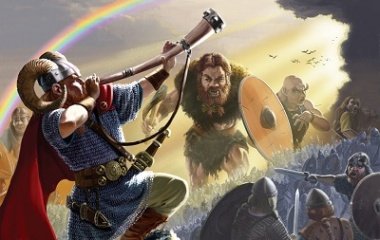 The list of Norse pantheon was not complete in these 6 Norse gods. But the 6 mentioned gods were the most major and powerful ones. Not only did they possess the incredible power but they also played important parts in the myth.

Many people might argue that Loki should be included in the list. However, the origin of Loki is still vague by now. Many accounts claimed that Loki was the offspring of the giant and he had lived in Jotunheim the land of Giant before he came to live in Asgard. He used his cunning and fast talk to persuade Odin to let him dwell in Asgard. So, in this writing of Norse Gods, Loki is not included.