To the Viking people, drinking and toasting were not simply consuming the alcoholic beverages. The drinking and toasting tradition was, in fact, highly respected and was the heritage that the Viking fathers had created and left to their next generations. In other words, Viking drinking tradition was a part of ancestral lifestyles and possessed deep religious and cultural religions.

In the modern age, we might view the Viking as the savage men with bearded and dirty clothes always ready to gulp down any beverages during their raids. The truth was not like what we were told by many TV series and movies. The Viking drinking tradition was much more fascinating and complicated than that. (See more What the Vikings Drank?)

The drinking culture of the Vikings was one of few subjects that the literature and the archeology agreed with each other. Sagas of the Medieval Norse-Icelandic were full of ale-brewing, mead-drinking, or beautiful Valkyries Choosers of the Fallen serving the fallen warriors in Valhalla with refreshments. Similarly, the archeological findings were filled with many drinking vessels, brewing types of equipment, and depictions of happy drinkers.

Norse mythology which deeply ingrained in the mind of the Vikings confirmed the idea that the Vikings viewed their drinking culture with sacredness and respect. The most famous Norse tale about drinking was Odin’s theft of Mead of Poetry.

As the Vanir and Aesir, two main god tribes, decided to end their war by creating a special peace treaty. They assembled, chewing berries and spitting the result out in a vessel. The berries then fermented and became Kvasir the wisest creature. However, when Kvasir traveled the Nine worlds to spread his knowledge, two dwarves killed him and brewed the Mead of Poetry from his blood and honey. The Mead then was taken away from the dwarves by the giants who then guarded the Mead within the cave in a mountain. As Odin knew the presence of the Mead, his well-known burning desire for knowledge motivated him to steal the Mead which obviously he thought belonged to the gods.

Odin managed to enter the mountain where Gunlod the giantess was guarding the Mead. With his wit and handsome appearance, Odin successfully seduced Gunlod and got permitted to try the Mead in the drinking horns. Of course, he then brought the whole Mead of Poetry to his home, Asgard. Odin and the Mead of Poetry by Hellanim

For their belief and respect for Odin, the Vikings put a lot of their thought into their drinking culture. Consuming divine beverages was an important part of formal ceremonies such as marriages, celebrations, and meetings. During such events, the Viking warriors would be served by the ladies of the houses with their drinks. They would hail their gods and their ancestors as well as giving meaningful and sacred toasting and oaths. (See more How to Toast like a Viking)

Another famous tale of the Viking drinking tradition was the story of Ásbjörn Selsbani a Viking settler and a chieftain. As Asbjorn needed grains to brew beer for his feast, he traveled to the South to buy some. On his way, he met the soldiers of King Saint Olaf. He took revenge on them and ended up dying sadly. 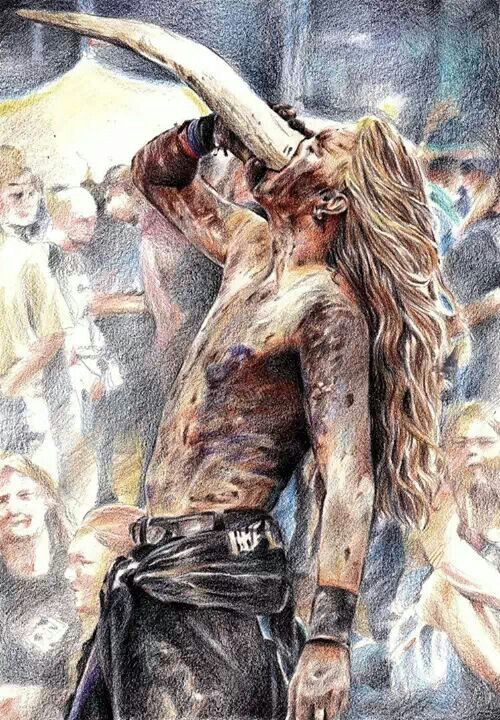 Asbjorn’s death stirred up the desire of keeping the Viking drinking tradition alive. This motivated his family and people to rebel and battle against the king who then was overthrown. When the desire for drinking caused the death of many big figures and a revolution, the Vikings once again realized that drinking was not only gulping beverages, but a lesson and an ideal aspect of their culture that they would rather fight and die for it than give it up.