Valhalla was considered to be one of the most desirable places in Norse mythology. The palace Valhalla was located in a beautiful part in Asgard.

Valhalla was situated in Gladsheim, Odin’s realm in Asgard. It was the most beautiful hall there. The palace of Valhalla was well decorated with shining shields and flashing spears. There were long table feasts for the warriors. 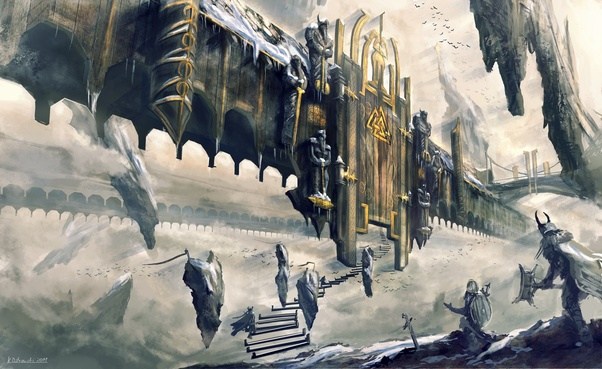 Two key factors that helped Valhalla gain so much reputation were the ruler and the dwellers. The ruler of Valhalla was Odin the Allfather. In Valhalla, Odin welcomed the brave human warriors who were slain in the battles. Odin promised those warriors a life that any being in the cosmos would envy. The warriors dwelling in Valhalla were known as Einherjar. They were guided to Valhalla by the Valkyries who were the warrior maidens of God Odin.

The Einherjar were originally the human warriors. They died proudly and honorably in battles; thereby, they gain an entrance to Valhalla. In Valhalla, the warriors would fight each other in daylight. Odin arranged every one of them a suit of armor and they just kept fighting day by day. When the nights came in, their wounds would be healed and they would feast all night long. Valhalla dwellers would never get worried over the shortage of food or the quality of life. Everything was so perfect.

In the Viking age, the belief of Valhalla was deeply implanted onto the mindset of every Viking. Thereby, in case they served in the army, they would fight nonstop with enthusiasm. Because they knew there was a beautiful afterlife awaited. The warriors that lived with Odin in Valhalla would take Odin’s side in Ragnarok. On that important event, no warrior survived.

In the modern sense, the word “Valhalla” meant a heavenly place where the deserving dead finally found eternal happiness.