Viking weapons and warfare (Part 1 of 2)

The Vikings were known as the brave and skilled warriors. This reputation could be boiled down to their weapons, tactics, and warfare as a whole.

We may only think about the Vikings as the brutal sea raiders pillaging villages. However, the majority of the Vikings were not raiders or warriors, but they were just normal farmers and fishermen. They actually were good at creating the fortresses. There were not only the soldiers in the fortress. There were women and children too, since their graves have been unearthed recently. So there seemed to be groups of people dwelled in here: king’s men and their families. The ring forstresses were believed to be the defensive and admininstrative centers that possibly were built by Harald Bluetooth.

All free Vikings had the right to possess weapons. Their main offensive weapons included axes, spear, sword, and they sometimes used arrows, bows, and missiles. Weapons were not only used in battle, farming, or fishing, they were wore as the symbols of their owner’s status and wealth. 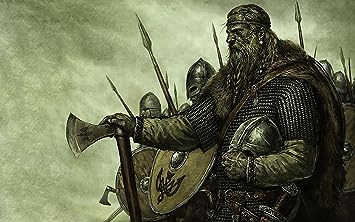 Axes must have been the most famous weapon of the Vikings. The Viking axes were single edged and made of iron. Viking axe designs might be different from each other due to the intended use. The axe for battle would be much lighter, thinner, and manoverable for they were used to crash any body parts of the enemies. The axe for argicultural tasks might be a little bit heavier and were used to build home, chopping wood, or hunting. The poor farmers and warriors used normal axes while the rich might found their pleasure in having their axes decorated with inlays of silver or even gold.

To the Vikings, swords were for the wealthy. Swords were costly and always presented the high social status. The swords were for single-handed use combined with a shield. The Viking swords were double-edged with a length of around 90cm. They were kept in the leather-bound wooden scabbards. Swords, however, were not commonly used in the battle but rather for decorative purposes in graves.Spears were also the common weapon to the Viking. The Viking spears included an iron blade on a wooden shaft. The spear might be 3m in length. The experienced Viking warriors could use throw two spears at a time with both hands. They even could catch the incoming spear and hurled it back as a deadly blow. According some sources, the Viking warriors threw their spears at the beginning of the battle as a deed of invoking Odin God of War for protection.