Of all the legends in the Viking history, Ragnar Lothbrok must have been the most reputable hero whose power was second to none in his period. So who was actually Ragnar Lothbrok? How come he was so influential in his time?

Who was Ragnar Lothbrok?

Ragnar Lothbrok was a legendary Viking who was also the king of Denmark and Sweden. In some materials, he was known as Ragnar Sigurdsson and he was assumed to be the son of Danish King Sigurd Hring. Sometimes, his name could be written as “Regnar” or “Regner” and his nickname may be “Lodbrok” or “Lodbrog”. Many people may question that whether Ragnar Lothbrok was a real figure or not. The answer is, yes. Ragnar Lothbrok was a real hero. The question that people may get confused at is that “How close is the Ragnar in TV series like “Vikings” to the actual figure? Moreover, many historians said that the achievements of Ragnar were a compilation of achievements of many Viking historical figures. In other words, the tales of Ragnar were inspired by more than one warlord.

Indeed, like many ancient warlords, Ragnar earned his power and respect through raiding and expanding territory. According to many accounts, Ragnar Lothbrok’s raids made the significant impact on 9th-century history. Some French historians said that while Ragnar was the Denmark ruler, he and his sons raided France ruthlessly.

Ragnar was one of the most intelligent leaders in his time. He sometimes refused the disciplined warfare tactics and applied the blitzkrieg tactics to surprise the well-organized enemies of his, particularly battles in France. France also suffered a lot when Ragnar declared war on the land of France.

Ragnar had three wives: the Shieldmaiden Lagertha, the Warrior Queen Aslaug, and the noble women Thora Town-hart. Ragnar had many children with his wives. His sons then became the famous warriors, some of them were Bjorn Ironside, who became more successful and well-known than his father and Ivar the Boneless 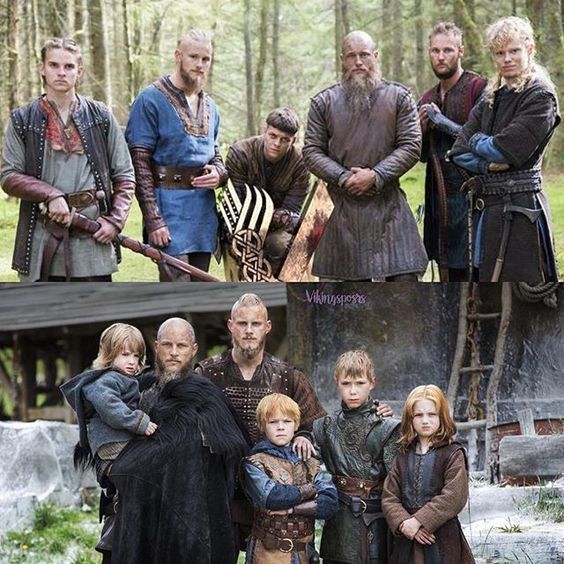 Ragnar and children in "Vikings"

Ragnar also had two daughters with the Shieldmaiden and some other daughters from his other wives. However, their identities could not survive until now.

The Shieldmaiden Lagertha of Ragnar was a true warrior. Ragnar met Lagertha in a very special situation. From that moment on, Ragnar was so impressed by her bravery and talent that he wanted to marry her immediately. Another wife of Ragnar, Aslaug, was also a queen of the warrior. Not only was Aslaug beautiful but she was smart as well. Aslaug was the offspring of two Viking legend, the mother being a shieldmaiden and father being Sigurd who killed dragon Fafnir in Norse myth.

Regarding the death of Ragnar, there were two accounts upon this. The first one said that Ragnar died of sickness. The second one claimed that Ragnar was slain by his big enemy King Aella.