In the Norse pantheon, the most famous and powerful gods must be Odin the Allfather. As the god of war, death, poem, and wisdom, Odin himself took the life of a wanderer and possessed many symbols that represented his presence and power. Those Odin symbols could be: Valknut, Ravens, Gungnir Spear, and Triple Horn

Valknut (pronounced “VAL-knoot”) was a symbol of three interlocking triangles. Valknut appeared in many runestones that dated back to the Viking Age though the name “Valknut” was not mentioned in such period. The name “Valknut” was offered to the symbol with the meaning of “the knot of the fallen warriors”. The Valknut symbol appeared in many depictions alongside Odin and his ravens. Somehow, it was interpreted as Odin was welcoming the fallen human warriors to come to Valhalla Hall of the Slain to live with Odin. Moreover, Valknut was also interpreted as the symbol that gave the Viking warriors strength and courage. As this symbol represented Odin’s presence and his welcome. The Viking warriors believed that as long as they fought to their last breath in the battle, they would get a seat in Valhalla with Odin the chief god they worshipped. This, for sure, loaded the Vikings with incredible courage to fight.

The most constant companions of Odin were the ravens whose names respectively were Huginn and Muninn. These two ravens were let to fly out to observe the Nine Worlds and returned to Asgard to tell Odin what they had witnessed. They perched on Odin’s shoulders and whispered into his ears what they saw. Maybe because of this, ravens became the symbol of Odin’s thought and mental power. They also became one of the most respected creatures in Norse mythology. The primary weapon of Odin was the Gungnir spear. This powerful spear of Odin was a pure treasure made by dwarves and was offered to Odin by Loki Norse Trickster. Gungnir was so special a weapon that it could be the symbol of the Aesir chief god. Like Mjolnir hammer of Thor, Gungnir spear never missed its target and always returned back to his owner. Odin carried Gungnir spear into his last battle in Ragnarok. He started the fight by throwing Gungnir spear toward his foes and yelled: “Odin Owns You All” (of course not in English). This became a Viking traditional practice in battle as they threw their spears over their enemies and past the King of the enemies. 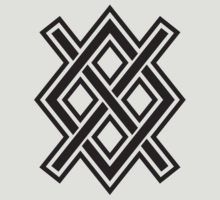 The symbol of Triple Horn consisted of three interlocked drinking horns. This symbol was believed to recall the Norse tradition of toasting in the horns. There was other interpretation that Triple Horn represented the God’s quest for Mead of Poetry, a special mead brewed from the blood of the wisest Norse being Kvasir. Whoever drank that mead would have the wisdom, the ability to speak in poem, and ability to persuade anyone. Specifically, Odin used his wit to persuade the giant Gunlod who guarded the special Mead of Poetry to let him try the mead for three times within three days. The three horns might have presented three times that Odin drank the mead with the horns. 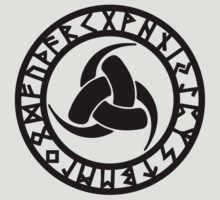 One thing for sure is that the design of Odin symbols is absolutely awesome, not to mention the power each symbol carries within itself. Because of the beautiful pattern of each symbol, Odin symbols have become a great source of inspiration for designs, especially jewelry designs. If you find Odin symbols interesting and want to express your Norse love to this Aesir chief god, check out on BaviPower some recommendations for Odin symbol jewelry: Stainless Steel Runic Valknut Pendant BP8-259; Viking Valknut Necklace; Raven Thor's Hammer Ring; Raven Mjolnir Amulet Pendant Necklace