In Norse mythology, Loki was known as the Norse Trickster who found pleasure in pranking other people. But what exactly did Loki do in Norse mythology? This blog post is to focus on Loki's Biggest Tricks.

One day, the ocean giant Aegir planned to give a feast. The two servants of Aegir welcomed all the guests making them give tons of praises to each of them. This really annoyed Loki so he decided to kill one of two servants. The gods were angry at Loki and wanted him to go away. But after a while, Loki came back and he swore to Odin that they could harmoniously drink together. The gods hesitantly allowed Loki to join the part. But the truth was that Loki did not change his behavior. He was not grateful and even insulting everyone in the feast, calling them cowardice, whore, unmanly, etc. He even dared to insult Odin the Allfather. This trickster finally shut up when Thor appeared and threatened to smash his skull to dust. 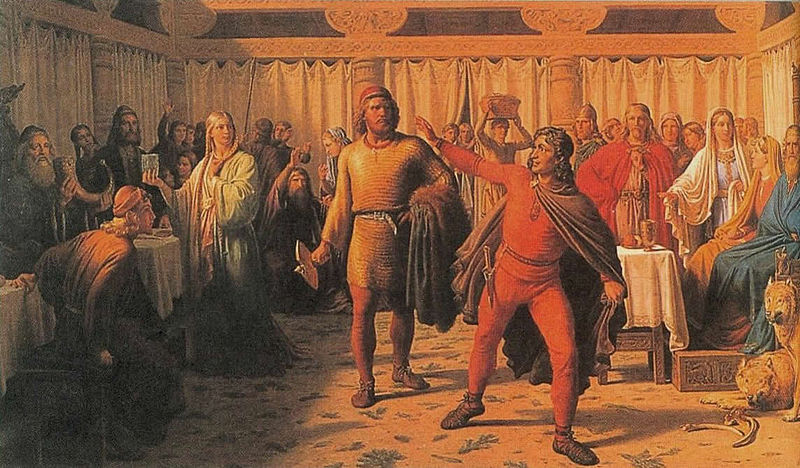 On one day that Loki felt bored, he decided to sneak into the room of Sif who was Thor's wife. Sif was famous for her beautiful golden hair and Loki just cut her hair off without any hesitation. There was no clear reason for this actions of Loki though. But he was caught and our God of Thunder surely did not find this funny as Loki did. Loki was about to be killed but with his fast talk, he persuaded Thor to let him go to make amends for his mistakes. Finally, Loki went to meet the dwarves and asked them to create a beautiful golden hair for Sif.

3. Shapeshifting into a female horse The stallion was attracted by Loki

This story is the sequel to the story of Cutting Sif's hair when Loki finally met some dwarves. The first group of dwarves managed to give Loki some priceless treasures. He brought such treasures to come and taunt the other group of dwarves for not being able to make such priceless treasure. He even bet his head and said that they could not produce anything better. This group of dwarves started to produce some treasures. Loki started to feel worried and shapeshifted into a fly. He stung the dwarves in the hand to distract them, resulting in the Mjolnir having the short handle and being used by only one hand.

1. The death of Baldur

The death of Baldur was the last straw that made the gods decide to severely punish Loki. The story was that Loki found out god Baldur could only be harmed with the mistletoe. So he decided to create a mistletoe arrow, giving it to the blind god Hodr and guiding him to throw the arrow at Baldur. The fact was that Hodr was just tricked by Loki and Loki was the main culprit. Baldur stabbed with the mistletoe arrow fell dead on the spot. This ignited the wrath of gods for only Baldur was the beloved god but also Baldur's death was the first sign of Ragnarok the Doom of Norse gods. Loki then was punished harshly for this.