Lessons That We Can Learn From Tyr

In the previous part (Lessons for Odin), we have discussed lessons that Odin the Allfather gave us, revolving around the lifelong learning process. In this part, we are to discover the lessons that we can extract from the character Tyr in Norse mythology.

The origin of Tyr was a little bit unknown. Many assumed that Tyr was the son of Odin while many believed that Tyr was even ancient than Odin and the other gods. No matter what theory it might be, what we know about Tyr in the modern sense is about his courage and his justice.

Pluck up your courage

Tyr was a true symbol of courage in Norse mythology. How come? Because he was the only god that volunteered to feed Fenrir the giant wolf. When gods decided to raise Fenrir by themselves in Asgard, they met with the problems that all were afraid of being devoured by Fenrir. Indeed, no one dared to approach the wolf, let alone feeding the wolf. But Tyr did. The blood of courage ran in his veins and he volunteered to feed Fenrir. Remember that the action of Tyr was the courage because he must have considered the pros and cons before taking actions. I think Tyr felt that if he did not feed the giant, the giant would not survive. But gods decided to raise him, how come gods mistreated him with hunger? Moreover, Tyr must have betted that Fenrir was still a little pup who might do no harm to him. So he plucked his courage and fed the pup.

This action presented the courage, not recklessness. Many might excuse their wrongdoings like scolding teachers or trying drugs as courage. But no, it isn't. It is the recklessness showing the lack of caring about danger and the possible results of one's actions. So carefully make sure what is the true courage to pluck up.

God Tyr was a man of his words, representing his qualities of justice and honor. Why was Tyr the man of his words? Well, once gods were trying to bind the enormous wolf Fenrir with their magical chains, the wolf demanded that gods swear not to trick Fenrir and one god put the hand in among his razor-sharp claws. But who else rather than Tyr volunteered to put his hand in Fenrir's mouth. And as the gods broke their words, Fenrir bit the hand of Tyr. This reasons for the depictions of one-handed Tyr. It was believed that Tyr was ashamed of Gods' deed of breaking promises. Even though he could withdraw his hand in time, he didn't want to become a cowardice. He accepted the loss as he deserved to be so. He accepted that his tribe went back on their words and he had to sacrifice something to make amends for. He acted like his oath. Tyr did not break his oath. He just compensated.

The lesson is quite clear, isn't it? Tyr taught us never to go back on our words. Once we give any our solemn word, be true to your word.

One for all was the mode of behavior that Tyr took up during the whole Norse mythology. While the sacrifice of Odin was made for the good of himself, all things Tyr sacrificed were for the good of his clan. I am not saying that Odin was selfish because Odin shared his Mead of Poetry to gods in Norse pantheon. What I mean is that the roots of sacrifice were different between Odin and Tyr. Odin was willing to sacrifice because he wanted more knowledge for himself while Tyr sacrificed to prevent his tribe from encountering any danger. 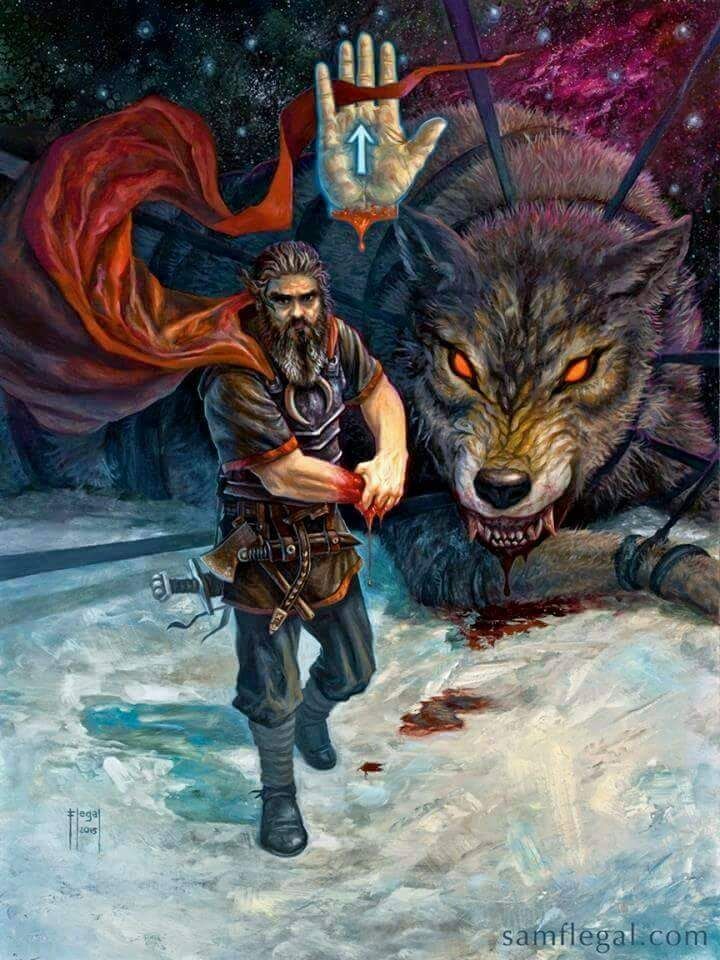 Tyr sacrificing hand for the good of his clan

Let take a look at the Binding of Fenrir. This story was the climax of Tyr's sacrifice. There must be someone that satisfied the demand of Fenrir or else the wolf would not collaborate with the binding. Tyr knew that and with the "one for all" mode, he volunteered for the good of the Norse pantheon and the good of the whole cosmos. Because he knew his voluntary action would help prevent Fenrir from doing harm to the cosmos. As mentioned above, Tyr did not break any of his promises. Rather, he just compensated for the oath-breaking action of others.

To be clear, the lesson is about the sacrifice for the community. We might not do anything great for the humanity (though I hope any of you can) but each person can sacrifice a little. Try to think about the good for you clan before yours. My this valuable "one for all" mode of Tyr shine brightly on your life.