Mysterious. Powerful. Perplexing. Majestic. Those are the words to describe the mythological creature – the dragon. In some folklore, the dragon most of the time is illustrated as a dangerous and unpredictable creature. No one can ever neglect its prowess and unexplained abilities. In Norse mythology, there were three figures who were assumed to be dragons: Jormungdandr, Nidhogg, and Fafnir. Jormungandr was the son of Loki and the brother of Wolf Fenrir. People called him the Midgard Serpent whose body encircled the whole Midgard with his tail in his mouth. Actually, the appearance of Jormungandr was supposed to be the combination of both dragon and serpent.

Odin once cast Jormungandr deep in the dark ocean. However, it was prophesied that when Jormungandr rose above the waves, the dark days of Ragnarok would begin. And Ragnarok did come. Jormungandr joined the army of his father and brother. Together they came to Asgard the Home of Aesir Gods to slay them. Jormungandr encountered his mortal enemy – Thor who then killed Jormungandr with the incredible blow from his hammer – the Mjolnir. Thor succumbed to the serpent’s venom.

Jormungandr has by far become one of the most notorious creatures in Norse myth. In the modern sense, this enormous serpent-like dragon presents the cycle of destruction and reborning and presents the wholeness or infinity. Many jewelry designers get the inspiration for their jewelry ideas from the image of Jormungandr, such as Jormungandr ring, Jormungandr bracelet, etc.

The second dragon was Nidhogg who entangled himself within the roots of Yggdrasil – the Tree of Life. Deep down there, he gnawed the roots of Yggdrasil and ate the corpses. The eyes of Nidhogg dragon sparkled in the darkness splaying its jaws. During the Ragnarok disaster, Nidhogg joined the giant army to dethrone the Aesir Gods – the Asgard dwellers. Nidhogg was one of few Ragnarok survivors to witness the new period of cosmos. 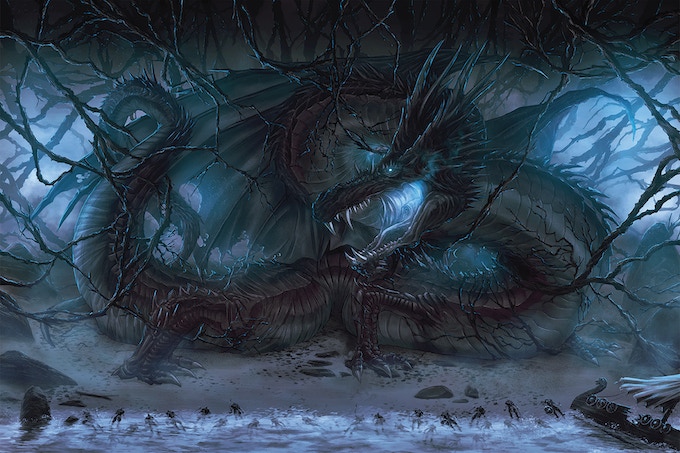 Fafnir, on the other hand, had nothing to do with Ragnarok. In Norse mythology, Fafnir was the son of the rich dwarf king. From the beginning, Fafnir did not take the dragon form. But when he was under the curse, he killed his father hoarding his wealth and fled into the forest. There he slowly changed into the form of a dragon to guard his stolen treasure. Despite illustrated as evil in myth, the Norse dragons in the modern sense represent the beginning and ending cycle. They are also the keepers of “gold” treasure, whether it might be literally gold or figuratively wisdom. The dragons thereby remains a mystery within the hearts and minds of the humankind.