“The Helm of Awe – I wore before the sons of men In defense of my treasure; Amongst all, I alone was strong, I thought to myself. For I found no power a match for my own.” Those are the famous lines for Helm of Awe from a poem in Poetic Edda. Helm of Awe or Aegishjalmur symbol has become an inspirational Viking Tattoo in this day and age.

What a Helm of Awe/Aegishjalmur symbol?

In the Viking belief, the symbol with eight spikes radiating out to protect a circle was known as the Aegishjalmur (Ægishjálmr) or the Helm of Awe. Aegishjalmur can be pronounced as "Eye-gish-hiowl-mer". This symbol was still a mystery though people may view it as a symbol of protection. Closely look at the symbol might show us that this symbol consisted of protective runes encircling the central point.

Many Viking warriors in the past applied this symbol into their body when they joined the battles. Regardless of any form, whether they wore the jewelry of Aegishjalmur or they inked the symbol into their bodies, they wore the symbol as their talisman. They believed that the sacred Helm of Awe would protect them in wars and would give them the strength to fight against their enemies. The symbol was even believed the offer the Viking warriors the glorious victory in battles. That reasoned the poem about the Aegishjalmur symbol mentioned above.

The Helm of Awe symbol somehow survived the destruction of time and made it to the modern days. In this day and age, the meaning of Aegishjalmur remained unchanged, revolving around protection and victory. But the context is not only in battles but also in the daily life. The wearers of the Aegishjalmur symbol hope they will be given the strength to step over any obstacles in life, the protection against any negative vibes, and the victory in any path in life.

A tattoo of Aegishjalmur is always a good idea for those who are seeking for the protection and victory in life. Below are some recommendations for Viking Helm of Awe Aegishjalmur tattoo: Helm of Awe and raven tattoo Helm of Awe tattoo in shoulder Helm of Awe Tattoo in palm 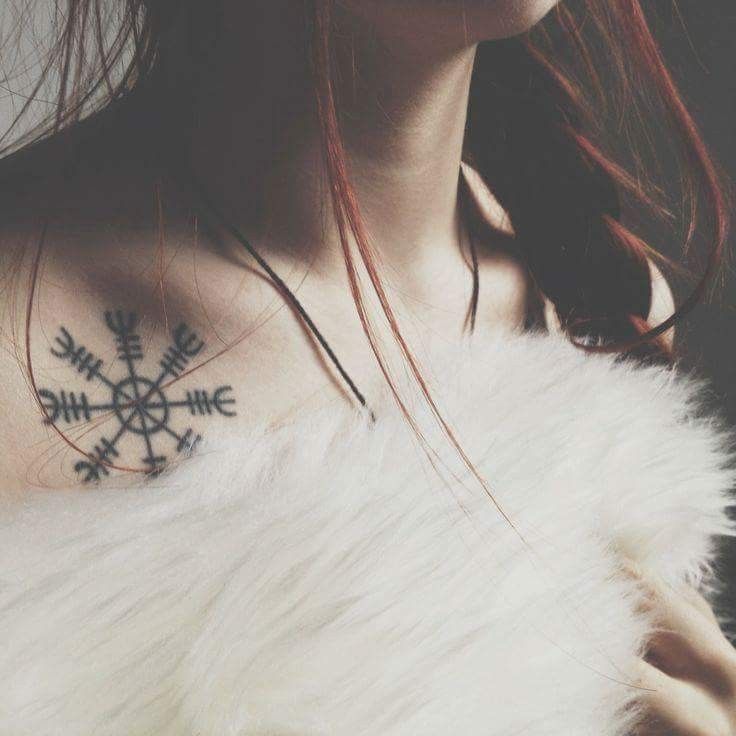