The Aesir and the Vanir lived separately in two different realms: Asgard and Vanaheim respectively (See Norse Pantheon). While the Vanir gods were associated with the power of magic, the Aesir gods were famous for their power of weapons.

One day, the Aesir gods saw someone watching from the Bifrost bridge to enter the Asgard stronghold. In fact, that wanderer was Freya a god of the Vanir tribe. She was taking the life of a wanderer to practice her magic of seidr which was to weave and alter the destiny of others. When the Aesir knew this wanderer possessed such wonderful magic, they were captivated. This was because although the Aesir was powerful, they were afraid of their fate as they could not do anything to change it. So the magic that the mysterious wanderer brought to Asgard impressed them at first sight.

However, they soon realized that their loyalty, bravery, and unity were left behind for the appearance of their shortcomings and selfish desires. They promptly blamed the wanderer for waging the civil war between Aesir gods and misleading them. They tried to slay her. The wanderer was stabbed with spears and brought to the pyre to burn. Three times the Aesir tried to burn her, three times she was reborn from the ash like the image of Phoenix we might know. The wanderer being speared and burnt

Knowing that they could not kill her, the Aesir release the wanderer. But that could not finish the hatred of Freya to the Aesir. She returned to Vanaheim and prepared a war.

As the Asgard Wall was destroyed, the Vanir gods came into Asgard to battle against the Aesir. Odin the Aesir chief god threw his spear into the foes to begin the war. They fought days and nights. In fact, the Vanir and the Aesir were evenly matched. The battle could not decide which side was the winner. As both tribes became tired of fighting each other, they came up with creating a peace treaty which was hostage exchanging. Freya, Freyr, and Njord from the Vanir gods came to Asgard while Hoenir and Mimir from the Aesir came to Vanaheim. Nonetheless, the Vanir felt they were tricked because the two Aesir hostages were not so much mighty like their Vanir hostages. Hoenir was offered the position of high counseller; however, the Vanir realized that without Mimir, Hoenir could not answer any question. Feeling like they were lied to, the Vanir decided to behead Mimir and send it to Asgard. Odin as a nonstop seeker of knowledge was devastated by the death of Mimir who was a wise Norse creature. 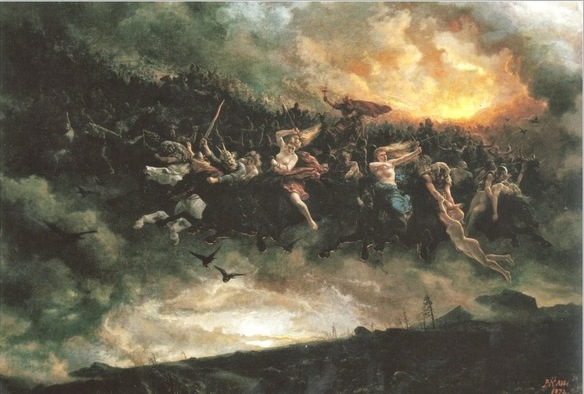 The two tribes then assembled to create another peace treaty as they could no longer tolerate the war. They chewed the berries and spat it into a vessel. The liquid inside the vessel became the wisest Norse being, Kvasir. However, Kvasir was soon murdered and his blood was used to brew the famous Mead of Poetry.