The Binding of Wolf Fenrir

Fenrir was the third son of Loki and giantess Angrboda. He was the most notorious villain in Norse mythology for his brutality and prophecy of killing Odin the Allfather. The gods tried many ways to prevented him and Ragnarok in general and the most well-known try must be the Binding of Wolf Fenrir.

Knowing the prophecy of Ragnarok, the gods came up with many precautions. They sent Jormungandr to the ocean, Hel to Helheim (Jormungandr and Hel were siblings of Fenrir and children of Loki). Fenrir who was set to kill Odin was kept in Asgard and the gods decided to raise the little pup by themselves. However, no one in Asgard dared to approach Fenrir, let alone feeding the wolf. Only Tyr the God of Justice and Honor had enough bravery to feed Fenrir. 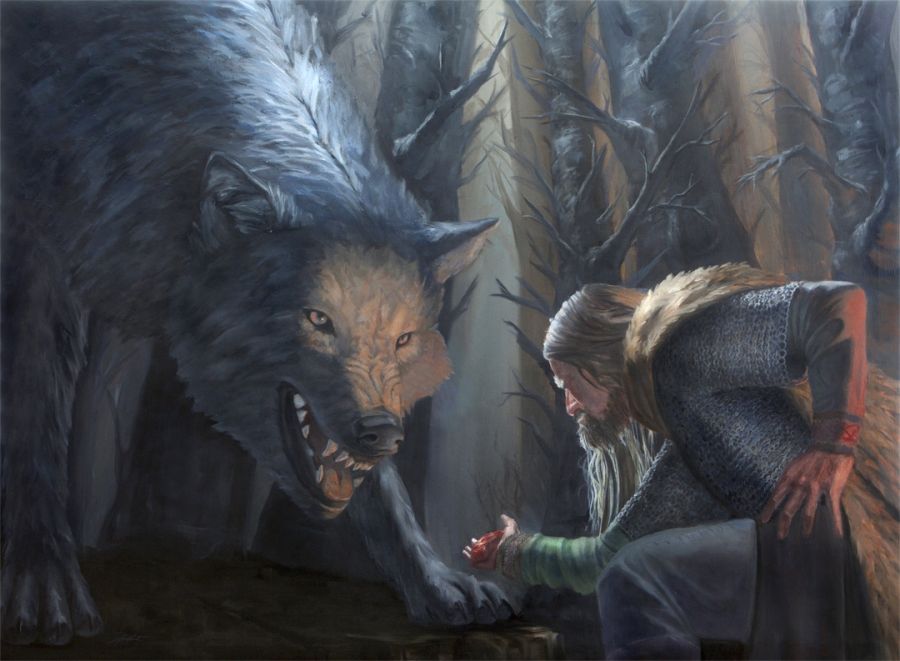 The incredible speed of Fenrir growing up provoked worry among the gods. They concluded Fenrir staying in Asgard was only temporary and there must be other methods of observing the wolf without letting Fenrir stay in Asgard or roam freely. They decided to bind the wolf with magical fetter.

The Binding of Fenrir

There were three times in total that the Gods tried to bind Fenrir. The first and second times were unsuccessful as the wolf could easily break the chain. The gods called for dwarves’ help in this case. They traveled to the land of Svartalfheim and asked the most brilliant craftsmen to create a magical fetter. The dwarves used special ingredients to create the chain: the sound of cat’s footsteps, the beard of a woman, the breath of the fish, and the spat of a bird. Gleipnir (“Open”) was its name. The chain was very thin and did not look to have enough strength to hold Fenrir back.

As the gods presented the chain to Fenrir, the wolf suspected this might be another trick of the gods. He smartly made the gods to make an oath by a god volunteering to put his/her hand in his mouth full of sharp-razor teeth. None of the gods agreed, except for God Tyr, He volunteered to satisfy the wolf’s demand. He put his hand into the jaws of Fenrir. As the binding seemed to be successful and Fenrir could not escape the fetter, he quickly bid the hand of Tyr and swallowed it.

In this tale, the qualities that Tyr embodied in the whole Norse myth seemed to be clearer. For the ones who only briefly knew Tyr as a god of war, this deed of Tyr proved his courage and honor. He sacrificed his hand for the good of the clan though after that he could also enjoy the peaceful life. This deed somehow illustrated that Tyr felt ashamed as the gods were going to cheat Wolf Fenrir. Then he decided that he would be hurt by the wolf as a payment for the gods’ oath-breaking action. Many assumed that Tyr could escape the bite from Fenrir but he did not behave like that. The qualities he embodied did not allow him to act like an oath-breaking coward. Then he lost his hand without any regret.

After binding Wolf Fenrir, the gods banished him to the middle-of-nowhere place. They thrust a magical sword among two jaws of the wolf. By this way, the gods believed, Fenrir could not harm anyone. From the mouth of Fenrir came a river. The name of the river was Ván meaning "Expectations" or "Hope". Many people assumed that Fenrir had harbored his long-standing grudge against Gods since then. He also clung to the hope of taking revenge on those who separated his family and tricked him many times.