In the Rune Meanings Part 1, we have discussed the meanings of the first eight rune letters in the Elder Futhark. There are still 16 more rune letters for us to discover their meanings. In this blog post, we are taking a look at 8 rune letters in the middle of the runic alphabet. Those are Hagalaz, Nauthiz, Isa, Jera, Eihwaz, Perthro, Algiz, and Sowilo.

This rune letter can be pronounced "Hag-all-az". The meaning of this word revolved around the destruction or crisis. However, positively, this Hagalaz wanted us to let go of the past, let go of what was no longer necessary in our life. Prior to that farewell, we must face the destruction of emotional blocks, ties of the past, etc. But when the destruction came from Hagalaz, it was always followed by the rebirth. That is to say, what existed at the moment could be destroyed for the better change in the future. 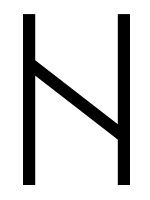 Nauthiz had the pronunciation like "Not-This". This rune letter indicated the necessity. Nauthiz was the rune of wanting, innovation, the willpower to overcome any troubles. Nauthiz was also the movement of retraining, relearning, and planning for future actions in order to get what one was yearning for. Isa or "Iss-ah" was the rune of ice and stillness. This Isa was the simplest letter in the rune alphabet. Ice was one of the most important elements in Norse myth as it played a part in creating the cosmos (See Creation of Norse World). This straight line Isa indicated the time we should spend resting and preparing for our upcoming actions. A recharging time before we took action. It was also the time for us to stop, look around, and further assess the whole situation or the path we were leading. Good things would happen in the end and Isa reminded us to keep calm and wait for the end.

We can pronounce this rune letter as "Yehr-ah". Most of the times, this rune meant a good harvest. The symbol might have presented two scythes for the harvest. In the modern sense, this rune letter was regarded as the rewards for hardships or series of hardships that one had endured. Everything was happening as it should and it was time to enjoy the fruits of our efforts. Eihwaz "Eih-Was" was the rune of strength, trustworthiness, reliability, and dependability. There must be phases that were the crucial changes in our life. Either it was youth or adulthood, we must face the changes as they were part of the growing-up process. The appearance of Eihwaz indicated the strength to overcome them all, planning for the target and reaching it. This Perthro rune was one of the most controversial letters in the alphabet. Many people, however, still believed this rune letter revolved around the fates and possibility in the future. The common pronunciation of Algiz was "Al-jiz". This rune letter was about defense and protection. In the past, it was the shield against the evil power and the enemies in battles. This Algiz letter was also believed to be the spikes in the Aegishjalmur symbol of the Vikings. As the Aegishjalmur was the symbol of protection and strength, the protective power of Algiz was reasonable. The appearance of this rune letter indicated the looming danger and a need to guard. Algiz was also the source of spiritual strength that could keep our mind away from the pressure and strain that we suffered daily. Sowilo could be pronounced as "So-ii-Lo". This rune letter was the Sun Rune. While Jera indicated a reward, Sowilo referred to a lifelong reward and success. It represented a wonderful source of power, brilliance, energy, and inspiration.